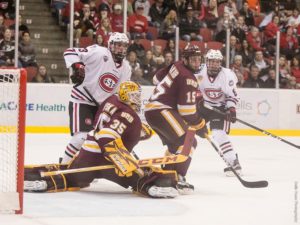 (Bulldogs Sports)  —  Joey Anderson waited nine games for his first collegiate goal, but it couldn’t have come at a better time.

The University of Minnesota Duluth right winger scored on a turnaround wrister from the low slot to give the Bulldogs its first lead of the night with 4:19 to go in the third period, then added an empty netter three minutes later in leading the nation’s No. 1 ranked team to a 5-3 victory over St. Cloud State University. UMD, which was making its National Collegiate Hockey Conference road debut, won for the fifth straight time at the Herb Brooks National Hockey Center while improving to 6-1-2 overall and a perfect 3-0-0-0 in NCHC play. The Bulldogs also extended their NCHC winning streak to a school-record seven games going back to last year.

The night got off to an inauspicious start for the visitors as the No. 8 Huskies (4-3-0 overall; 0-1-0-0) struck just 34 seconds into the game. Senior center Dominic Toninato, who leads all current Bulldogs in career goals, got his first tally of the year at 5:06 of the first period when he his shot from the left face off circle snuck underneath the right arm of St. Cloud State netminder Jeff Smith. St. Cloud State added to more scores later in that period before Alex Iafallo brought the Bulldogs to within 3-2 with his team-leading sixth goal of the 2016-17 season with 1:25 left before the first intermission.

It remained 3-2 until senior left winger Kyle Osterberg’s backhander on a semi-wraparound found the back of the net at 8:39 of the third period. Anderson, who paces UMD with eight assists, sealed the win with first two-goal outing of his young Bulldog career. UMD has outshoot the opposition 11-2 in the third period this season.

“I thought we got better as the game went on — it seemed like it took us a while to get used to the big rink,” said UMD head coach Scott Sandelin. “We again found a way to get it done in the third period with some good efforts. It was a nice win for us.”

Anderson, Iafallo, and Toninato all finished with three points on the evening. Bulldog rookie goaltender Hunter Miska, who kept his perfect collegiate record intact (5-0-0) made 25 saves and held the Huskies off the board for the final 41:46 of play. Both long-time intrastate rivals went 0-for-5 on the power play.

UMD, which is 11-1-0 in its last 12 skates on an Olympic-sized ice sheets, and St. Cloud State will meet again Saturday night.