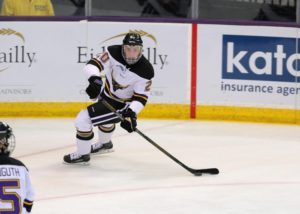 The host Lakers scored twice before the game was four minutes old with a screen shot from a long ways out from defenseman Owen Headrick finding the back of the net at 1:57 and Brayden Gelsinger converting on a rebound chance at 3:34. The Mavericks owned a 9-5 shots on goal advantage after the first period, but found themselves trailing 2-0.

Freshman forward Marc Michaelis tallied on a shorthanded breakaway chance when he went forehand-backhand before roofing the puck past Gordon Defiel to cut the lead to one goal at 7:23 of the second period. The goal is his fourth of the year. The Lakers regained a two-goal advantage on a Gage Torrel goal at 12:54 and LSSU entered the locker room at the end of the second period owning a 3-1 lead.

Max Humitz’s breakaway marker at 6:41 of the third gave the Lakers a 4-1 lead and an empty netter by Diego Cuglietta closed out the scoring.

Maverick goaltenders Cole Huggins and Jason Pawloski combined to stop 24 shots in the contest. Minnesota State (6-3-0, 4-2-0-0 WCHA) was unsuccessful in all five its power play chances, while Lake Superior State (1-7-1, 1-4-1-1 WCHA) was zero-for-six in opportunities with the man advantage.