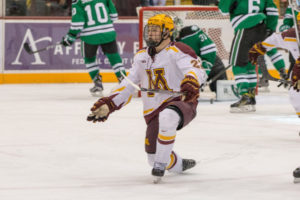 (GopherSports.com) – Tommy Novak tallied a career-high three points including an extra-attacker goal with 1:17 to play as the No. 13 Gopher Hockey program skated to a 5-5 overtime tie with No. 3 North Dakota at Mariucci Arena.

The Gophers, who rallied from deficits four times in the draw, have now tallied three extra-attacker goals in the last two games – both overtime ties against nationally ranked opponents.

After falling behind by two goals in the first 10 minutes, Minnesota’s power play came alive in the second half of the opening period with a pair of goals on the advantage. Lettieri scored at 11:12 to make it a one-goal game and Novak added his first of the night at 17:56.

Following a scoreless second period, the two teams combined for six goals in the third. After UND scored in the opening minute, Sheehy’s power-play tally made it 3-3 and Brent Gates Jr. rallied the Maroon & Gold once again at 14:45 with his fourth of the year – a new career high for the sophomore.

Minnesota outshout UND 37-22 on the night while going 3-for-8 on the power play and 4-for-5 on the penalty kill. Eric Schierhorn made 17 saves in net for Minnesota.

The Gophers close out the weekend against North Dakota on Saturday, Nov. 5 at 8 p.m.