(Minneapolis, MN) — University of Minnesota star wrestler Gable Steveson of Apple Valley says he is moving past the disappointment of not getting a chance to win a national championship in his hometown in front of a record crowd. Steveson had just won the Big Ten heavyweight title and was the heavy favorite to win the N-C-A-A title at U-S Bank Stadium in front of more than 50-thousand fans. But, COVID-19 forced the cancellation of the wrestling championship tournament and those hopes were dashed for Steveson and all college wrestlers. Steveson also saw his Olympic dreams end for 2020 when the Japan games were postponed to 2021. He will be involved in next year’s Olympic trials and will be a favorite to represent the U-S next summer in Japan. Steveson says the last six months have been eventful and heart-breaking, but he has to move forward day-by-day. He finished his season 15-0 with a Big Ten title. Steveson also earned his best grades while having to study classes on line during the pandemic. He says he is learning how to manage his time so he can be a better athlete and a better student. Steveson recently posted on social media that he’d like to become a star in the W-W-E once his days at the U of M are over, much like former Gopher Brock Lesnar. 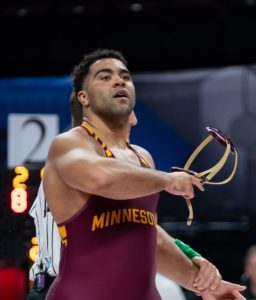