GOPHERS TAKE ON IOWA/NEBRASKA
The University of Minnesota is set to compete at Iowa and No. 1 Nebraska this Friday and Sunday. The Friday match is set for 6 p.m. in Iowa City, Iowa. The Sunday match against the Huskers is slated for a 1 p.m. start in Lincoln, Neb. 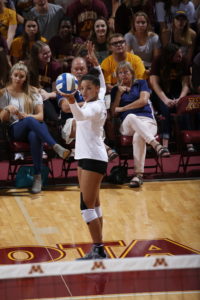 Golden Gopher freshman Alexis Hart of Independence, Missouri has had a major impact on the Minnesota team.  MNN Sports Director Mike Grimm sat down with the talented young player this week:

FOLLOWING THE GOPHERS
Both Friday and Sunday’s Gophers matches will be televised on the Big Ten Network. The matches will also have a gameday live page on gophersports.com.

ABOUT THE HAWKEYES
The Iowa Hawkeyes enter the Minnesota match with a 15-5 overall record and a 5-3 mark in league action. Iowa, who finished the 2015 season at 2-18 in Big Ten play, has defeated Maryland (twice), Northwestern, Purdue and Indiana already this season. Lauren Brobst leads the team with 184 kills, followed by Meghan Buzzerio with 157 and Jess Janota with 151. Loxley Keala leads the team with 724 assists, while Annika Olsen has a team-best 251 digs. As a team, the Hawkeyes are hitting .280.

ABOUT THE CORNHUSKERS
After a two-week stint, the Nebraska Cornhuskers move into the No. 1 spot of the AVCA poll and enter the weekend with a 16-1 overall record and a 7-1 Big Ten mark. As a team, the Huskers are hitting .309 and average 2.83 blocks per set. Kadie Rolfzen leads the team with 194 kills (averages 3.40 per set), followed by Mikaela Foecke with 151 and Briana Holman at 128. Kelly Hunter leads the team with 623 assists, while Justine Wong-Orantes has 214 digs. Amber Rolfzen holds a team-best 1.47 blocks per set.

ALL-TIME SERIES AND LAST TIME
Minnesota holds a 73-11 all-time record against the Iowa Hawkeyes, dating back to 1975. Minnesota and Iowa faced each other once last season when the Gophers won in straight sets, Oct. 24, 2015, in Iowa City, Iowa.

Minnesota is 6-32 all time against Nebraska, dating back to 1975. The Gophers and Huskers played against each other just once last year with Minnesota winning in four on Oct. 23, 2015. The win marked the first time Minnesota defeated Nebraska on their home court since 1980.

GOPHERS ON THE ROAD
Minnesota is 7-3 on the road this season and 4-3 when playing on the opponent’s home court. All three Gopher losses came when playing at Stanford, at Penn State and at Michigan State, each ranked in the top 15. 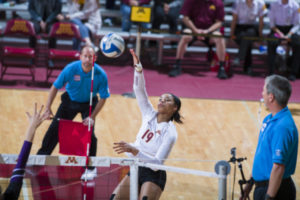 Hart for the kill (photo courtesy of Gopher Sports)

GOPHERS’ LAST ACTION
Minnesota fell to No. 14 Michigan State in five sets, last Saturday, in East Lansing, Mich. Minnesota was led by Sarah Wilhite who had 20 kills and tied a career-high 59 attempts. She finished off the double-double tying a career-high 19 digs. Alexis Hart had 15 kills and hit .303, while Hannah Tapp had 13 kills and hit .321. Paige Tapp also had eight kills and hit .368. Samantha Seliger-Swenson had 50 assists and 13 digs. As a team, the Gophers hit .268 to MSU’s .201. MSU tacked on 15 blocks to Minnesota’s 10. The Gophers also held a 65-56 dig advantage.

ON THE DOCKET
After playing seven of the last eight on the road, the Gophers return to the Sports Pavilion confines next weekend. Minnesota hosts Rutgers and Penn State Oct. 28-29. The Rutgers match is set for a 7 p.m., start, followed by a 6:30 p.m. start against PSU. The PSU match is televised live on Big Ten Network.

GOPHERS RANKED THIRD IN RECENT AVCA POLL
For the second-straight week, Minnesota is ranked No. 3 in the recent American Volleyball Coaches’ Association poll. The Gophers have or will face 12 teams ranked in the top 25, including this week’s match up against No. 1 Nebraska.