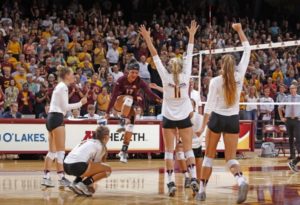 Wisconsin was handed its first loss of the Big Ten season, and are 14-2 overall and 6-1 in league action. Minnesota snapped a nine-match Badger win streak. It was also the first Big Ten loss for the Badgers since the 2015 Golden Gophers defeated them on Oct. 17, 2015, which snapped Wisconsin’s 18-match Big Ten win streak.

As a team, the Gophers hit .323, while they limited Wisconsin to just .050, a season low. The Gophers had just 13 errors in 99 attempts to Wisconsin’s 27 errors in 101 attempts. Minnesota had 14 team blocks to the Badgers’ three. That 14-block mark was the fourth-highest for the team this season and the most blocks for the Gophers in three-set fashion.

The Gophers travel to No. 14 Michigan State on Saturday. Minnesota and the Spartans play at 7 p.m. CT.

Set 1: Minnesota hit .242 to Wisconsin’s -.029 to take the first set 25-20. The set started out close, staying tied until Minnesota took a four-point lead at 14-10 and continued to keep the lead. The Gophers went on a 3-0 lead on Lohman’s service rotation taking a seven-point lead, forcing Wisconsin to take a timeout at 19-12. The Badgers took a 3-0 lead, causing Minnesota to take a timeout at 20-17. The Gophers followed the timeout with back-to-back kills from Wilhite, forcing Wisconsin to take a second timeout at 22-17. After the Badgers went on their own run, Minnesota took a second timeout at 24-20. Following the timeout, H Tapp ended the first set with a kill.

Set 2: The Gophers hit .452 to Wisconsin’s .267 to win the second set 25-18. Minnesota took an early 7-2 lead, extending the lead to seven forcing a Wisconsin timeout at 14-7. Kills from P Tapp and Lohman extended the Gophers’ lead to eight, causing the Badgers to take a second timeout at 17-9. Minnesota continued the 4-0 run on Lohman’s service rotation, extending the lead to 20-9. Wisconsin shortened Minnesota’s lead at 24-18, but a kill from H Tapp put the Gophers at set point, and a kill from Hart ended the set.

Set 3: Minnesota hit .286 to Wisconsin’s -.056 to win the set 25-14 and take the match. The set started out close, with rallies going back and forth until Minnesota took a three-point lead at 7-4 and again at 10-7. The Gophers continued to hold the lead, with Wisconsin taking a timeout at 12-8. Minnesota increased the lead to five from Wisconsin errors and a P Tapp kill, causing a second Badger timeout at 16-11. Minnesota went on a 4-0 run off P Tapp’s service rotation to increase the lead by ten at 22-12. Wilhite put the Gophers at match point, and H Tapp ended the match.