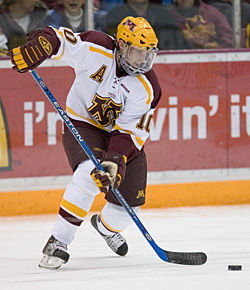 Goligoski when he played at the U

The Arizona Coyotes have addressed one of their biggest offseason needs, signing defenseman Alex Goligoski to a five-year, $27.375 million deal.

Arizona acquired Goligoski’s negotiating rights in a trade with Dallas last week and brought him out for a visit.

Goligoski is a Grand Rapids native, who played college hockey for the Golden Gophers.

Goligoski liked what he saw and so did the Coyotes, taking one of the top free agent defensemen off the market.

”We are thrilled to sign Alex to a long term contract,” Coyotes general manager John Chayka said in a statement. ”Alex is a great skater and a smart, efficient defenseman who moves the puck well and makes his teammates better. He will help solidify our defense and support the growth of our young players.”

The 30-year-old Goligoski has been a steady defensemen in eight NHL seasons with Pittsburgh and Dallas. He played all 82 games with the Stars last season, finishing with five goals and 32 assists. He also had four goals and three assists in 13 playoff games.

Goligoski, who has 55 goals and 222 assists in 562 career NHL games, agreed to the deal after spending two days in Arizona last week.

”I am very happy to join the Coyotes,” he said in a statement. ”Arizona is a great place to live and play and I’m excited to join an up and coming team that has a ton of talent and a very bright future.”

The Coyotes became an exciting offensive team with the additions of Max Domi and Anthony Duclair, but needed help on the blue line. Though a bit undersized at 5-foot-11, 185 pounds, Goligoski should give them a boost as a top-4 defenseman.