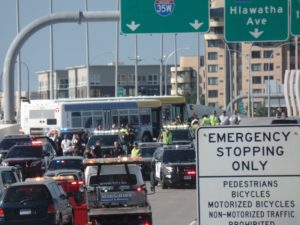 Troopers arrested 41 protesters who made their way to I-35W in Minneapolis Wednesday morning blocking the freeway during rush hour.

The State Patrol, Hennepin County Sheriff’s deputies and U of M police responded to the area and closed the freeway for more than an hour. Four vehicles were impounded.

Officials say those arrested will “be charged appropriately for their actions which endangered the motoring public.”

Lt. Matt Langer says that while the State Patrol “supports the right to exercise one’s First Amendment rights, but the freeway is not the place to do so.” And he says “the closure of an interstate freeway for the purposes of a demonstration is unacceptable. They are used by everyone and are an artery for emergency vehicles. It is illegal to walk on the freeway and blocking traffic is dangerous for both pedestrians and motorists.”