The No. 5 Gopher Hockey program returns to Big Ten action this weekend with its final regular-season road trip, heading to Michigan for a pair of league games tonight and tomorrow.

Lettieri Lights It Up
Senior forward Vinni Lettieri is having his best season with the Maroon & Gold, posting career highs for goals (17) and points (36). Lettieri leads all active Gophers in scoring against Michigan with 13 points (six goals, seven assists) including his first career hat trick earlier this year as Minnesota swept the Wolverines at Mariucci Arena. The senior posted a pair of goals in last weekend’s split with Wisconsin and added a win-preserving block at the goal line in the final minute of Saturday’s 3-2 win. 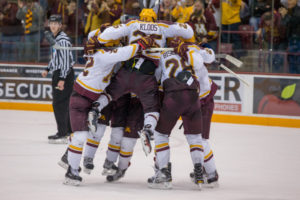 Captain Kloos Leads the Way
Senior captain Justin Kloos continues to climb the Minnesota all-time scoring list and currently ranks tied for 31st with Trent Klatt. Kloos needs one point to tie Steve McSwain for 30th all-time in scoring for the Gophers. A nominee for this year’s Hobey Baker Award, Kloos leads all active Big Ten skaters and ranks third among active NCAA skaters with 146 career points (62 goals, 84 assists). Kloos, who is expected to skate in his 150th career game this weekend, tallied his sixth game-winning goal of the season last Saturday, tying the senior for the NCAA lead this year. MNN Sports Director Mike Grimm spoke with Kloos prior to the team leaving for Michigan:

Sheehy’s Scoring Tear Stays Hot
Sophomore forward Tyler Sheehy currently leads the Big Ten and ranks eighth in the nation with 48 points (19 goals, 29 assists) this season. All three stats are career highs for the Hobey Baker Award candidate. In the last 10 years, only Erik Haula has had higher season point totals for the Gophers with 51 in 2012-13 and 49 in 2011-12.

Bischoff Breaks Out
Senior defenseman Jake Bischoff leads all Big Ten defensemen with 28 points (four goals, 24 assists) this year and ranks tied for eighth among all NCAA defensemen. A candidate for the Hobey Baker Award this season, Bischoff has posted career highs for assists (24), points (28) and blocks (74) this season. His 74 blocks rank tied for 10th nationally.