Same matchup, same site, but this time Moss will be on the sideline in a suit and tie.

There’s no mystery, either, about where his loyalty still lies. 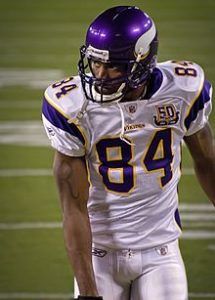 ”I know it’s going to be fun to be back and see these boys remain undefeated,” said Moss, now an ESPN analyst at age 39 who is four years removed from his final season in the NFL and 12 years out from his last full season with Minnesota.

The Vikings (3-0) will face the Giants (2-1) for the sixth time in their series on a Monday night. This will also be the second prime-time kickoff at U.S. Bank Stadium, two games into the sparkling $1.1 billion building’s history.

”I was a little excited for it and felt the energy from my own house,” said Moss, who shared his enthusiasm on Instagram that day before the game . ”So I know it’s going to be loud.”

Moss played for five teams in all. He made his mark with the Vikings after they drafted him in the first round in 1998 following his slide down the board due to character concerns. Moss created his share of conflicts and controversies in Minnesota, and his second stint in 2010 ended after four games in spectacularly implosive fashion. But the lanky, loquacious wide receiver never lost his love for the franchise. Naturally, after Moss landed his new job with the ESPN crew, he quickly circled the game at Minnesota on his calendar.

”I’m more of an old-school guy, closing in on 40 years old,” Moss said on a recent conference call. ”I’m excited to see the fans and the new stadium. … But all my memories lie with the old Metrodome.”

The Giants will bring with them a talented, talkative pass catcher who perhaps reminds Moss a little bit of himself .

Odell Beckham Jr. has 19 catches for 280 yards through three games for the Giants. But he hasn’t scored a touchdown yet and was agitated throughout his much-hyped matchup against cornerback Josh Norman in a loss to Washington last week. Beckham had to be confronted on at least two occasions by new coach Ben McAdoo about keeping his poise.

The Giants are depleted at running back, with Rashad Jennings (thumb) listed as questionable and Shane Vereen (triceps) out for the season. But they’ve got enough downfield threats forquarterback Eli Manning with Beckham, rookie Sterling Shepard and a resurgent Victor Cruz that this will be an intriguing matchup with coach Mike Zimmer’s defense.

”It’s going to be a test,” said Manning, who’s 2-5 in seven career starts against the Vikings, with five of his 14 interceptions returned for touchdowns. ”Our receivers have to get open at times. We have to run the ball well and get in good down and distance. It’s a combination of a lot of things. They have a good third-down blitz package. We have to be prepared for a lot of things.”

The Vikings harassed the last two NFL MVP award winners in the last two weeks, totaling 13 sacks against Green Bay’s Aaron Rodgers and Carolina’s Cam Newton, but they’re not any more comfortable facing Manning. Their 49-17 victory at home last season was aided by the absence of Beckham and the elimination of the Giants from the playoff chase earlier that day.

”I don’t rate guys or rank guys or anything like that, but I mean the guy has won two Super Bowls,” Zimmer said. ”He knows where to go with the ball. He gets it out quick. He’s got good footwork. He’s always a big challenge to play.”