You are here: Home / News / Fergus Falls man set to sail in pumpkin 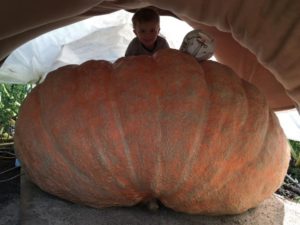 Rick Swenson is hoping to make it into the Guinness World Records this weekend.

The Fergus Falls man raises giant pumpkins. This year he plans to sail one weighing over 1,000 pounds up the Red River. He’ll launch from Grand Forks, headed north to Oslo, Minnesota.

Swenson says it’s not as strange as it may sound. He says there are pumpkin boat races all over the country. He got nervous when a man from Pennsylvania broke the existing distance record last month, going 8 miles in his pumpkin boat.

Swenson is confident he can make the 26 mile trip which would be a new record. Friday, he’ll use a saw to hollow out part of the pumpkin for enough room to sit in.

Using a paddle, he estimates the trip will take about 18 hours, but he’s prepared to go 24 hours if needed. Swenson has a veteran catfish guide who knows the river along on one of two boats following him. One of the boats is equipped with 10,000 watts of spotlights if he has to sail at night.

Thanks to MNN Affiliate KFGO.  To hear full interview click below: