The American Civil Liberties Union is suing top law enforcement officials in the City of Minneapolis and the State of Minnesota, on behalf of protesters injured during demonstrations following the death of George Floyd. A-C-L-U Minnesota Legal Director Teresa Nelson says police used unnecessary violence, often without giving protesters warnings or orders to disperse — or enough time to leave the area. She says protesters “were instead kettled… between two lines of police who were shooting rubber bullets and pepper spray. They had to abandon their bicycles and climb over a fence to get to safety.” Nelson says four plaintiffs — including well-known activist Nekima Levy Armstrong — suffered injuries that remain two months later, including severe bruising and vocal issues from tear gas. 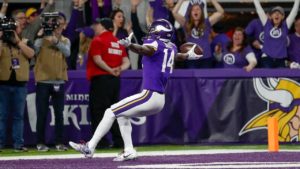 Stefon Diggs has a new beginning with the Buffalo Bills. And he isn’t dwelling on his departure from the Minnesota Vikings. Speaking with Buffalo reporters for the first time since his blockbuster trade in March, Diggs repeatedly expressed excitement over his new surroundings while also downplaying his role in leaving Minnesota. ”As far as my […]