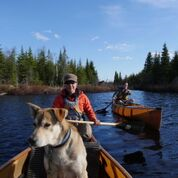 A flotilla of supporters will greet Minnesota adventurers Dave and Amy Freeman as they paddle out of the Boundary Waters this afternoon after staying in the Wilderness one full year. They’re spotlighting what they warn are dangers of proposed sulfide mining. Amy Freeman says, “It’s a long battle, so we’re prepared to kind of dig in for the long haul because this wilderness resonates with us so much.”  Dave Freeman echoes,  “We’re gonna continue to speak loudly for this place, because I don’t know what else we could do. It’s like no other place on earth.”  The Freemans fly to Washington D-C Monday to meet with elected officials. They’re also releasing a film in October and plan to write a book.

The couple  traveled more than 3,000 miles by canoe and dog team as they explored more than 500 lakes and streams in the BWCA Wilderness ove the past year.  In 2014, the Freemans traveled by canoe and sailboat from Ely to Washington D-C as a first step in their efforts to protect the Wilderness.

Hear an excerpt from Bill Werner’s interview with the Freemans:

The complete interview will air later on Minnesota Matters on many Minnesota News Network stations.