You are here: Home / Sports / Could AP play this year for Vikings? 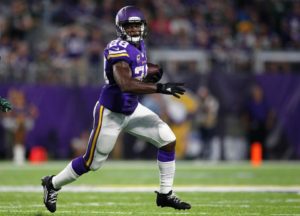 Minnesota Vikings running back Adrian Peterson is reportedly making progress in his return from meniscus surgery and could return to the field next month, according to ESPN.com.

The Vikings increased speculation that Peterson’s return was getting closer by waiving running back Ronnie Hillman on Monday, leaving the team with just Jerick McKinnon and Matt Asiata at the position.

Minnesota owns the worst rushing offense in the NFL, averaging 70 yards on the ground, but snapped a four-game slide with a 30-24 win over Arizona on Sunday and is tied for first place in the NFC North with the Detroit Lions. The Vikings visit the Lions on Thursday.

“He’s a workaholic,” cornerback Captain Munnerlyn told ESPN.com of Peterson. “I definitely wouldn’t put anything past this guy. He’s a fast healer. His makeup is definitely a fighter. We’ll see.”

“That’s a tough injury to come back from. He’s got to think about his career, but he’s a guy that wants to come out there and help the team win. One thing is on his mind: He wants to win that Super Bowl. So, he feels like if he can come back and definitely contribute to us winning, he definitely will do it.”

Peterson, who reportedly began light running recently, suffered the torn lateral meniscus in his right knee in a Week 2 win over the Green Bay Packers.