You are here: Home / Gophers / Bateman goes to Ravens in first round (AUDIO)

The Baltimore Ravens selected Minnesota’s record-breaking receiver Rashod Bateman in the first round of the 2021 NFL Draft with the 27th overall pick. Bateman is the first Gopher to be taken in the first round since Laurence Maroney was taken 21st overall by the New England Patriots in 2006.

Bateman was named the 2019 Big Ten’s Richter–Howard Receiver of the Year and was one of 12 finalists for the Biletnikoff Award. He was named All-Big Ten First Team and AP Third-Team All-America.

Bateman’s former Gopher teammate Tyler Johnson was drafted by the Tampa Bay Buccaneers last year and went on to win the Super Bowl. Bateman and Johnson are the first true Minnesota receivers to be selected in consecutive NFL Drafts ever. Prior to Bateman and Johnson the last two Gopher receivers drafted were Eric Decker (2010) and Ron Johnson (2002), which means that prior to this year Minnesota had two receivers drafted in the previous 18 years. 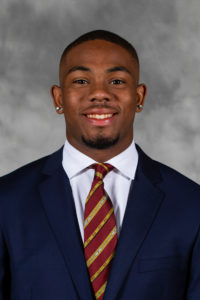