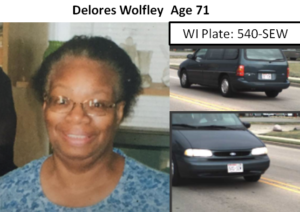 Authorities are looking for a missing 71-year-old Wisconsin woman who was last known whereabouts were in Rushford, Minnesota.

Delores Wolfley of Beloit has been missing since yesterday morning. She purchased gas at a Kwik Trip in Rushford today and officials are concerned that Wolfley may be lost. S

he is driving a Green 1997 Ford Windstar Minivan with Wisconsin license plate 540 SEW.