You are here: Home / News / BCA turns findings in Castile shooting over to County Attorney 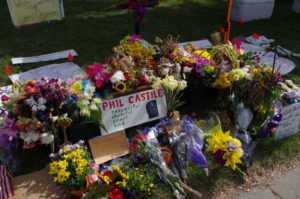 The Bureau of Criminal Apprehension (BCA) has turned over its findings in the officer-involved shooting of Philando Castile to the Ramsey County Attorney’s Office for review.

Castile was shot and killed after a traffic stop in Falcon Heights on July 6th. The shooting prompted weeks of protests in front of Governor Dayton’s residence and elsewhere in the Twin Cities. The Ramsey County Attorney’s Office says it’s in the process of talking to national use-of-force consultants to assist in its review of the case and there’s no estimated timeline for when a decision will be made.

The BCA says it will continue working with the county attorney as needed on the investigation.