You are here: Home / News / Big fine for ship that dumped oily waste into Lake Superior 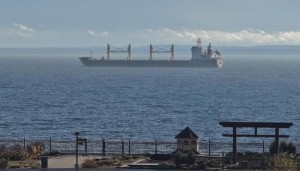 One of the largest fines ever for a pollution violation on the Great Lakes — one million dollars — will be paid by the German company that owns the Cornelia, which was detained in the Duluth Harbor for over six weeks last fall.  Coast Guard Lieutenant Patrick Lammersen says an investigation determined the ship dumped oily waste into the ocean, and into Lake Superior at least once.  Lammersen says records on handling of oily waste were falsified.  He says it’s “serious because… obviously with our pristine waters here, especially in Lake Superior, we take any pollution seriously, whether it be a small one-gallon spill, up to whatever the max could be, because it would destroy a lot of our ecosystem and our sensitive waters.”