It doesn’t look like either team will make it back to Indianapolis this December.

The Hawkeyes (5-3, 3-2), who are off this week, still has something of a plausible path to the West title. But it involves winning their final four games, which would include home victories over the Wolverines and unbeaten and seventh-ranked Nebraska (7-0, 4-0), and one more loss for Wisconsin (5-2, 2-2) and two for surging Northwestern (4-3, 3-1).

So how did two teams that just 10 months ago played a title game end up here?

Michigan State’s young defense, which held the Hawkeyes to just 13 points in that slugfest of a championship game in 2015, is letting up nearly 30 points a game. The Spartans had as many as six freshmen playing defense at times in last week’s last week’s 28-17 loss to Maryland (5-2, 2-2).

Iowa’s defense ranks 20th nationally at 18.9 points allowed per game. But its offense has been a mess since mid-September, failing to score more than 21 points in four of its last six games.

”It certainly gives you time to look deeper at what you’re doing and re-assess where your team is at,” Iowa coach Kirk Ferentz said of the bye week. ”Right now, we’ve come short three times. We’d certainly like to close that gap.”

Michigan State hosts rival Michigan knowing that a loss would eliminate the Spartans from the East race.

”The (Michigan) game is played on the field. You’ve got to be able to block, tackle and catch the football,” Michigan State coach Mark Dantonio said. ”This is a very fundamental game played at a very high level, and we’ve got to be able to win our fair share of battles.”

BAD BREAK FOR THE BADGERS

Wisconsin kept its slim West hopes alive with a 17-9 win at Iowa last week. But the Badgers suffered a major blow when it was announced that linebacker Jack Cichy, its leading tackler, is out for the season with a torn pectoral. Cichy had 60 tackles, including 37 in his last three games. The Badgers host the Huskers in a critical West showdown, and sophomore Ryan Connelly is expected to take Cichy’s place.

A big reason why Northwestern has turned into a 1-3 start into a winning record has been the progress of sophomore quarterback Clayton Thorson. He has nine touchdown passes against just one pick in his last three games, all victories, and is third in the Big Ten with 240 yards passing per game. The only league player with more touchdowns than Thorson (14) is J.T. Barrett of No. 6 Ohio State (6-1, 3-1), who host the Wildcats on Saturday.

”He’s really gaining confidence through his experience. It’s gaining knowledge of our offense, trusting in his abilities and just playing at a faster tempo,” said Northwestern coach Pat Fitzgerald, an Illinois native who yelled ”Go Cubs!” at the end of his time on the weekly coaches’ teleconference. 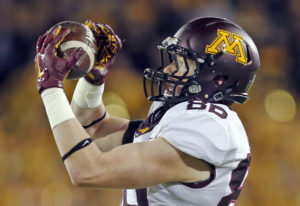 PASS CATCHER OUT FOR GOPHERS

Minnesota tight end Brandon Lingen is out indefinitely with a left foot injury.  Head coach Tracy Claeys did not rule out Lingen returning at some point this season.  Lingen has just three catches for 28 yards this season.  In addition, Minnesota defensive lineman Steven Richardson is underoing concussion protocol, while linebacker Jack Lynn will sit out the first half of this weekend’s game to finish serving a targeting penalty from last week’s win over Rutgers.  Both Lynn and Richardson are from the state of Illinois.

Illinois found itself down to its third quarterback in last week’s 41-8 loss to Michigan, and the game went about as expected. Jeff George Jr., the son of former Illini star and top NFL draft pick Jeff George, was 4 of 15 passing for 95 yards with a TD, an interception and a fumble in his first start. Coach Lovie Smith wouldn’t commit to George as the starter for this week’s home game with Minnesota (2-5, 1-3).

”We saw improvement on until the end of the game. What Jeff brings to the table is a strong arm. He’s confident in his arm, making all of the throws,” Smith said.

”We’re in this together, as a staff and as players. Tough coaches and tough players fight through things,” said Ohio State coach Urban Meyer about last week’s loss. All three of Meyer’s national title teams bounced back from a regular-season loss.