The Big Ten heavyweights spent the first three weeks of the season beating up on lesser opponents while climbing the rankings. With five teams in the top 15 of The Associated Press Top 25 , more than any other conference, it’s time for the Big Ten to get to work.

The schedule on Saturday is full of big-time matchups. Third-ranked Ohio State visits No. 14 Oklahoma, No. 4 Michigan hosts improving Colorado, No. 12 Michigan State travels to No. 18 Notre Dame and Nebraska hosts No. 22 Oregon.

In the new playoff era, meaty matchups like these in the nonconference may become more common. One of the main components in the selection process for the four-team playoff is strength of schedule, so power programs can no longer afford to pad the first month of their schedules with no-name schools that get paid to take a beating.

”I think you’ll see more and more of it,” Nebraska coach Mike Riley said. ”It looks like a unique way, different way, that people are starting their season with their non-league games, like we’re playing and like we saw right from the first weekend. I think it adds a lot of intrigue and excitement to it.”

And there are more than just playoff implications.

When the Buckeyes go to Norman on Saturday, the Sooners will be hosting several sought-after recruits that Ohio State coach Urban Meyer would love to land as well. Come out of the game with a win in front of some of the most talented high school players in the country, and they could win more than just a game.

”Our performance in this game, there’s going to be a lot of people watching, and that certainly is important,” said Meyer, whose Buckeyes outscored Tulsa and Bowling Green by a combined 102 points.

And finally, games like these help teams gear up for the grind of the conference season that looms just around the corner.

”This will be a great game for our team to see where we are against a team that’s nationally ranked and has been a national team for a lot of years now,” Riley said. ”It will be really good for the Huskers in preparation for what we’re going to see as the season goes on.”

Other notes from around the Big Ten:

The Hawkeyes are facing an FCS team this weekend. So they can relax with another tuneup, right? Not so fast.

North Dakota State is coming to town on Saturday. The Bison have won five straight national championships and are 8-3 in their last 11 games when they step up in weight class to face an FBS opponent. And they are not afraid.

”My experience is the biggest difference is just depth and overall numbers,” coach Kirk Ferentz said. ”But the guys they put out there are just tremendous players. They’ve got a lot of guys that look like guys we play with that may have gotten overlooked a little bit in recruiting.” 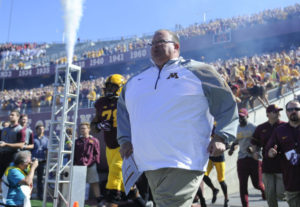 When Minnesota scored late to go up 30-23 against Oregon State on opening weekend, coach Tracy Claeys got some attention for his decision to go for 2 points to make it a two-possession game. Claeys has long believed that if the conversion fails and his team still only leads by seven, most teams would kick the extra point if they scored a late touchdown to try to force overtime rather than go for the win with a 2-point conversion.

The Gophers handled Indiana State with ease on Saturday. But Claeys said if they had been in a similar situation against the Sycamores, he would have kicked the extra point for an eight-point lead.

”A smaller school, an underdog on the road, if they would have went down and scored, they probably would have went for 2,” Claeys said. ”The majority of teams, we will go for 2 down there.”

Northwestern is 0-2 on the season, with eyebrow-raising losses to Western Michigan and Illinois State. They are 211th in the nation in offense, and coach Pat Fitzgerald said Northwestern needs better play from its offensive line if things are going to start turning around.