No. 7 Nebraska at No. 11 Wisconsin. The Cornhuskers have won 10 of their last 11 and are 7-0 for the first time since 2001. With a win, they’ll remain in control of the Big Ten West and change the opinion of those who’ve been unimpressed with their body of work against a light schedule. Nebraska has lost four of the last five meetings with the Badgers, and Camp Randall Stadium has been the Huskers’ house of horrors. They’ve been outscored 107-41 in their last two visits. Mike Riley lost 35-0 in Madison in his last trip there, with Oregon State in 2011, and now he returns for the biggest game since he took over the Huskers last year. With two Big Ten losses, the Badgers are in desperation mode. Even though their defense has been hampered by injuries , coordinator Justin Wilcox’s unit is one of the best in the country.

No. 2 Michigan at Michigan State. Never mind that Michigan State has lost five straight for the first time since 1991. Mark Dantonio can’t stand living in the Wolverines’ shadow, so even though the Spartans aren’t playing for much this season and are 23 +-point underdogs, don’t be surprised if they push Michigan. No doubt, Jim Harbaugh and his Wolverines have payback on their minds. They’ve dropped three straight to the Spartans and last year they lost 27-23 at the Big House on the last play when Jalen Watts-Jackson ran back Michigan’s botched punt attempt for a touchdown. 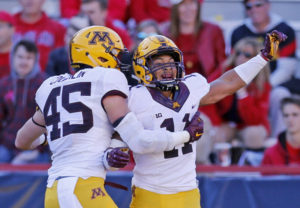 Wisconsin’s Corey Clement, with 164 yards against Ohio State and 134 against Iowa last week, is coming off his first back-to-back 100-yard games since 2013. … Minnesota has allowed only one touchdown (to Rutgers) in the first half of its four conference games. … Illinois’ Hardy Nickerson leads the Big Ten with 10.3 tackles a game. … Michigan has lost four straight in the series with Michigan State on only four occasions since the teams began playing in 1898. … Penn State heads to Purdue on a seven-game losing skid in true road games. … Indiana is averaging 290 yards passing to rank second in the Big Ten. Its opponent, Maryland, has allowed just one team to pass for more than 200.

Northwestern is a 26 +-point underdog at No. 6 Ohio State. During the Wildcats’ three-game win streak, Clayton Thorson has thrown for nine touchdowns against one interception and Austin Carr has been the Big Ten’s hottest receiver. But they’ve lost 29 of their last 30 against Ohio State, and the Buckeyes are in a foul mood after losing at Penn State. Urban Meyer has lost back-to-back games only four times in his 15 seasons as a head coach. Each of his three national championship teams (2006, 2008 Florida and 2014 Ohio State) has overcome a regular-season loss to win out.

Wisconsin QBs Alex Hornibrook and Bart Houston both are in coach Paul Chryst’s plans against Nebraska. Hornibrook is the better passer, particularly on deep balls, and will remain the starter. Houston was the starter in the three nonconference games but didn’t play in the Badgers’ first four conference games. He got in for two series last week against Iowa, went 4 for 6 for 59 yards and a touchdown, and gave the Badgers a running threat.
###