Halfway through the season, the Big Ten’s quarterback carousel is still spinning.

Nearly half the teams in the conference have already made QB changes for a variety of reasons – injuries, poor play or a coach just looking to shake things up. So far, the results have been mixed.

”I thought he went out and led the offense, executed the calls, made good decisions. He still needs to be more consistent,” Ash said Tuesday. ”I like his personality, his energy and the leadership he brings to the offense.”

Perhaps Rutgers’ move should have been expected after losing four straight and being outscored 174-14.

Other coaches, with fewer problems, have made similar decisions.

Wisconsin coach Paul Chryst benched fifth-year senior Bart Houston in favor of redshirt freshman Alex Hornibrook less than a month ago. Hornibrook has lost two straight – to No. 2 Ohio State and No. 3 Michigan – since winning at Michigan State and the Badgers are still ranked No. 10. 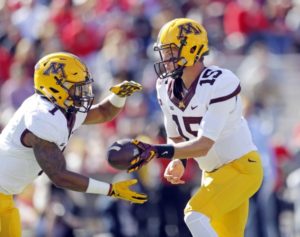 Minnesota got its first conference win behind former walk-on Conor Rhoda, who was 7 of 15 for 82 yards against Maryland filling in for injured starter Mitch Leidner (concussion). Leidner could miss Saturday’s game against Rutgers, too. The Terrapins lost with Tyrrell Pigrome, who replaced Perry Hills (shoulder). It’s not clear if Hill will return this weekend.

The most shocking decision may have come from Michigan State coach Mark Dantonio, who started Brian Lewerke over Tyler O’Connor on Saturday then brought O’Connor back in the third quarter of a 54-40 loss to Northwestern.

That change didn’t help much as the defending Big Ten champs head to Maryland with a four-game skid and a starting quarterback still to be named.

”We’ll see how the practices work out this week. We’ll make some determinations as we go, sort of go from there,” Dantonio said. ”It will probably be more of a game time decision.”

Just to keep everyone on their toes.

Here are some other notable items around the Big Ten:

Purdue interim coach Gerad Parker got thrown right into his new role Tuesday. First, he took questions from local reporters before participating in the conference’s weekly coaches’ call. This is going to take the 35-year-old, first-time head coach a little getting used to.

”I know our administration didn’t see some things they wanted to from our staff,” he said, explaining the firing of Darrell Hazell. ”It’s been a different situation for our staff and our players and a weird situation for me.”

FILLING IN THE LINES

The Big Ten has 10 bowl tie-ins and the lines are already starting to fill up. The Buckeyes, Wolverines and No. 8 Nebraska all became bowl-eligible last weekend. If Iowa protects its home field against the Badgers this weekend, the Hawkeyes would join the list. Four other teams – Maryland, Minnesota, Penn State and Wisconsin – can all move within one win of becoming bowl-eligible with victories Saturday.

The Hawkeyes broke the school record for consecutive road wins (nine) last weekend. In fact, all six conference games were won by the visiting team – the first time that has happened since Nov. 7, 2009. And this weekend at Penn State, Ohio State can break the Big Ten record for most consecutive road wins in conference play. With the win at Wisconsin, Ohio State tied the mark set by Michigan (17) from 1988-92.