You are here: Home / Sports / Big Ten set for a Big November

The Big Ten enters the final month of the regular season with eight of the 14 teams still in realistic contention for a spot in the conference championship game Dec. 3. Here’s a look at the road each team must face as it tries to make it to Indianapolis:

Remaining schedule: Maryland, at Iowa, Indiana, at No. 6 Ohio State.

Why the Wolverines make it to Indy: They have the best defense in the country, the game’s most dynamic player in Jabrill Peppers and a quarterback in Wilton Speight who keeps the offense on schedule and takes care of the ball. They end their four-game skid against Ohio State and win in Columbus for the first time since 2000.

Why the Wolverines stay home: Ohio State beats them for a fifth year in a row or they slip up in a tricky game at Iowa.

Why the Buckeyes make it to Indy: Their top-10-in-the-nation defense recaptures the dominance it showed in September. J.T. Barrett keeps willing them to wins. They win their biggest home games of the year against Nebraska and Michigan.

Why the Buckeyes stay home: Special teams foibles, such as the ones that cropped up late against Penn State, or defensive letdowns like the ones that happened against Northwestern. Offense continues to be inconsistent. They lose to Michigan for the first time in five years.

Why the Nittany Lions make it to Indy: They have the easiest remaining schedule among the three East contenders. Big Ten rushing leader Saquon Barkley shreds defenses that all rank seventh and lower in the conference against the run. QB Trace McSorley continues his streak of four straight turnover-free games.

Why the Nittany Lions stay home: The dam breaks on a defense that has gone from middling to above average in recent weeks. The injury bug that bit them hard early returns.

Why the Cornhuskers make it to Indy: They win at Ohio State to break a 19-year drought in road games against top-10 opponents. Tommy Armstrong Jr. makes plays with his legs and avoids bad decisions in the passing game. The defense continues to limit big plays and intercept passes.

Why the Cornhuskers stay home: They lose to Ohio State, and Wisconsin, which owns the tiebreaker against them, wins out. Armstrong throws bad interceptions. The offensive line can’t hold up because of injuries. Their dominance in fourth quarters wanes in close games.

Why the Badgers make it to Indy: They end a five-game road losing streak against Northwestern and win out. They get sharper performances from QBs Alex Hornibrook and Bart Houston. RB Dare Ogunbowale complements Corey Clement the way he did against Nebraska. The defense keeps doing what it’s been doing.

Why the Badgers stay home: The defense sustains another major injury to a starter. Hornibrook and Houston can’t get out of their own way and continue a pattern that’s seen them throw nine TD passes against 10 interceptions. 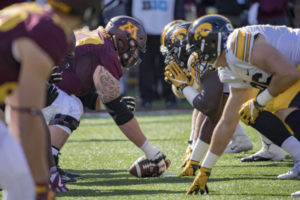 Why the Gophers make it to Indy: They successfully navigate an extremely difficult stretch of three games after hosting Purdue. Rodney Smith continues his streak of 100-yard games. The defense suddenly becomes better than average.

Why the Gophers stay home: QB Mitch Leidner and his teammates don’t play the best football of their careers. There’s slippage in their high red-zone efficiency and their league-best 1.25 turnover margin.

Why the Hawkeyes make it to Indy: They find a way to win at home, where they’re 2-3, and get through the second-toughest finishing schedule in the league besides Maryland’s. Their middle-of-the-pack offense suddenly gets a jolt and keeps taking care of the ball.

Why the Hawkeyes stay home: The last four games are too taxing for a team that’s underperformed all season. A bland offense stays that way against the tough defenses coming up. The defense drops off at all.

Why the Wildcats make it to Indy: They don’t let a close loss at Ohio State trip them up during a mostly positive second half of the season. Clayton Thorson maintains the form that’s seen him throw 10 TDs against two interceptions the past four games. Austin Carr remains the best receiver in the Big Ten.

Why the Wildcats stay home: They can’t find a way to move the ball on the ground beyond Justin Jackson. Opponents have a 64-percent completion rate and throw for 275 yards a game.