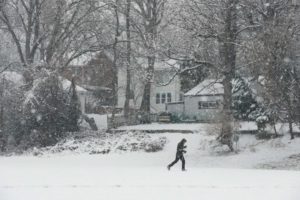 As predicted the first winter storm of the season is causing hazardous driving conditions across a large section of western, west-central and northern Minnesota. MN-DOT is advising no travel in areas under a blizzard warning, including Saint Cloud, Fergus Falls, Willmar, Marshall and Morris. Blowing snow is causing whiteout conditions in some areas. Up to 10 inches of heavy, wet snow are on the ground Park Rapids in north-central Minnesota, where Lynnette McFarren with the Chamber of Commerce says travel is very slow. “People in the city are starting to move a little bit, but not much,” she says. And are the snowplows out? “Yes they are. Met a few plows this morning, yes. They’re trying, yes.” Between six inches and a foot of snow is expected from Marshall to Alexandria to Brainerd Lakes, with heavier amounts into northeast Minnesota.

Mandi Lighthizer Schmidt at MN-DOT’s district office in Willmar reports reduced visibility with “some visibility at zero; some white-out conditions. We’ve got most roads being completedly covered with blowing snow; high winds, snow and slush.”  The State Patrol reports over a hundred crashes so far, including a fatal on Highway 59 in Murray County in southwest Minnesota.