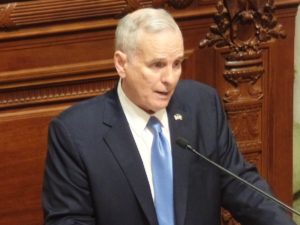 Governor Mark Dayton says he’s going to Mayo Clinic today for a checkup after fainting Monday night during his State of the State address — and the governor also revealed he has prostate cancer.  Dayton says he received the diagnosis last week and will go to Mayo soon for a consultation.  Asked if he’s still up to the job of governor, Dayton said, “I think I am. And if I don’t, I won’t continue, but I believe I am.”  Dayton’s quip that “when I had my hip surgery, there’s no brain cells in my hip, and there are probably no brain cells in my prostate either,” brought laughter and applause from the audience.

Dayton says he believes the prostate diagnosis and last night’s fainting episode are “two separate issues.”  The governor says he didn’t have any difficulty until a minute or so before he collapsed, and joked that he learned the lesson that “the speech was too long.”

Here’s Q&A from Dayton’s press conference today at the Capitol: