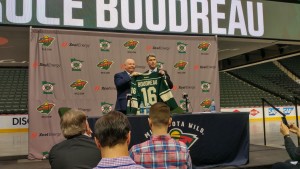 The last time Bruce Boudreau landed in Minnesota, his dedication to the sport left much to be desired.

Now he’s back in the capital city as an NHL head coach on his third team, bringing a passionate work ethic to the Wild developed over four decades of a vagabond career with the mutual hope of reaching an unprecedented level of postseason success.

If this job pans out for Boudreau like the gigs in Washington and Anaheim did with an early round departure from the playoffs, well, the familiar plateau won’t be because this 61-year-old hockey lifer didn’t care.

”There’s an off day, and he’s still in there at 8 a.m. pacing around and looking for someone to talk hockey with,” general manager Chuck Fletcher said.

Minnesota hasn’t come close to Boudreau’s eight division titles in nine years, so the coach with the highest winning percentage among his active peers in the league – who’s one of seven in NHL history to win 200 or more games with two different teams – was an easy pick.

”What I liked about having Bruce as my first coach is he set a very high work ethic bar. He made you really go hard. Practices were long. We skated. You don’t mess up a play in practice. You have to re-do it. That was cool because it just makes your standard a lot higher,” Washington defenseman Karl Alzner said.

The Wild were outskated on Thursday in a 3-2 loss at St. Louis, with their home opener set for Saturday against Winnipeg. Implementing this aggressive, attacking system with a new group that played a different way for nearly five years under previous coach Mike Yeo will take a little time. Boudreau is as good as there is, though, at swiftly getting a team to buy in to a philosophy and scheme and seeing on-ice success.

”This has been successful for me wherever I’ve gone so I don’t know why it wouldn’t be successful here,” Boudreau said. ”The idea for me is I keep things really simple. I don’t have fancy words or phrases to the players on how the communication goes. It’s pretty straightforward, black and white conversation, so they get what I’m talking about pretty early on in the season and then it’s just working on it on a continual basis.”

Having skated or coached for 27 different teams over the last 44 years, Boudreau has a big memory bank to draw on.

Quick with a quip and prone to a malaprop with a penchant for profanity, Boudreau was asked the day before training camp began how the feeling-out period has gone with his previous teams as the players have adopted to his personality.

That was a shot at his 1-7 record in the winner-take-all final games of postseason series with the Capitals and Ducks. He made it to the conference finals once. Still, that’s quite an accomplishment for a once-underachieving player who preferred partying to conditioning and was once arrested for streaking in a bar during his days as a star for the junior-level Toronto Marlies. He showed up out of shape in 1975 for a one-year stint with the Minnesota Fighting Saints in the WHA, before the league folded. Drafted by his hometown NHL team, Boudreau played the majority of his eight-season career in the league with the Toronto Maple Leafs.

”I still get mad at myself that I could have been an NHL player for a long time if I had done the right things, but I didn’t,” Boudreau said.

After years of bouncing around the AHL, he transitioned into coaching.

A married father of four with a roly-poly build who reads comic books and listens to country music, Boudreau has learned the art of managing people because of his everyman ability to connect with a variety of types. He’s demanding but humorous enough to consistently keep the mood light. The locker room has motivational quotes from sports greats like Vince Lombardi, Muhammad Ali, Jerry West, John Wooden and Jack Nicklaus painted on the walls above the equipment stalls. Whatever works for this team, which checked out on Yeo during a midseason freefall that cost him his job. So here comes a new system and a clean slate.

”You’re not really becoming best friends with the coach, so I think it’s more about making sure that you’re comfortable with systems or playing as a unit of five or killing penalties or power plays,” captain Mikko Koivu said. ”The sooner the better it is that we get on the same page.”