You are here: Home / News / Budget wrangling continues at State Capitol, one month to adjournment deadline 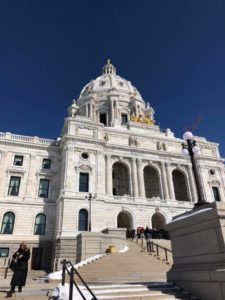 Lawmakers continue assembling the state budget at the Minnesota Capitol this week, but Republicans want Governor Mark Dayton more involved.  Dayton says Republicans in the House and Senate must first reconcile their own differences, then he’ll get involved to negotiate a final budget. But House Speaker Kurt Daudt says, “Minnesotans will be better served if the governor’s at the table negotiating immediately and not sitting out. My hope is that he will be engaged immediately, and we’re gonna keep encouraging him to do that.”  Dayton responds, “I had to go through the budget discipline to get everything I wanted to do into a balanced budget, and that’s their responsibility [also] before we start negotiating [on] our differences.”

Daudt fires back, “We don’t need the governor sitting on the sideline during the legislative session. I hope that the governor is fully engaged through the whole thing.”  Dayton says his commissioners will be at this week’s conference committee meetings that Republicans are chairing, but “it’s their responsibility first to reconcile their own differences.”

Governor Dayton and Republicans must agree on a state budget before the May 22nd deadline for the legislature to adjourn, or a special session will be necessary.