You are here: Home / Sports / Bulldogs advance in overtime (AUDIO) 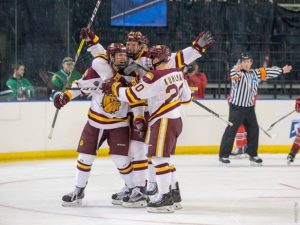 (UMD Bulldogs Sports)  —  Senior defenseman Willie Raskob of Hastings may have been the one who ended it, but he was the first to admit that someone else was the hero in the University of Minnesota Duluth’s 3-2 overtime victory over Ohio State University in the NCAA West Regional semifinals Friday night.

Raskob scored the game winner 11:58 into sudden death to send the Bulldogs on to Saturday’s West Regional title game against Boston University (which needed two overtimes to take down defending national champion North Dakota 4-3 earlier in the day) in Fargo, N.D. It was his teammate, rookie goaltender Hunter Miska, however, who stole the show.

“It was obviously a great feeling to be the guy who goal, but we would not have still been playing had it not been for Misk,” said Raskob, who also was credited with an assist. “He was absolutely outstanding.”  Miska, of Stacy, recorded a career-high 40 saves, the majority of which came in the third period and overtime and were of the highlight reel variety. He also kept Ohio State, which sports the nation’s most effective power play (32.2 percent), off the board on all four of their man advantage opportunities while hiking his unbeaten streak to 17 games (a 14-0-3 run that dates back to Jan. 14).

“I felt really good tonight,” said Miska, a 2016-17 Mike Richter Award (most outstanding NCAA goalie) Top 5 Finalist who has now made 33 consecutive starts. “The team did a good job in front of me and allowed me to see the puck well.”

The No. 1 seeded Bulldogs, who have now won six straight (the longest streak in the country at the moment), took a 1-0 lead on senior center Dominic Toninato’s wicked wrister from the left faceoff circle 49 seconds in to the second period and then doubled that advantage 13 minutes later when freshman defenseman Nick Wolff sailed a shot from the left point past Ohio State netminder Matt Tomkins. The No. 4 seeded Buckeyes (21-12-6 overall) got goals from Matt Joyaux and Gordi Myer five minutes apart midway through the third period to force overtime. UMD (26-6-7) was outshot 42-32 on the night.

“This is what this team has done all year,” said UMD head coach Scott Sandelin. “We’ve had to grind through some games when maybe we haven’t been at our best and find ways to win. Tonight was no different.

NOTES: Willie Raskob’s goal was his fourth goal of the year — but first that didn’t come on the power play. It was also his first collegiate overtime tally … The Bulldogs are now unbeaten in their last 12 games that have gone beyond regulation, going 5-0-7 since falling 2-1 to North Dakota on Feb. 19, 2016 in Grand Forks, N.D. … Senior left winger Alex Iafallo extended his personal scoring streak to 12 games by assisting on Dominic Toninato’s goal … Since the NCAA went to a regional format in 1987-88, UMD is a perfect 8-0 in first round games … Dominic Toninato, whose 16 goals this season equals his personal best, led both teams with five shots … Scott Sandelin is 11-5 in NCAA playoff outings during his 17-year head coaching career with the Bulldogs, but one of those losses was to Boston University (3-2 in the 2015 NCAA Northeast Regional championship).