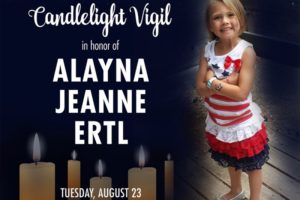 A candlelight vigil will be held tonight in honor of a five year-old Watkins girl whose life came to a tragic end.

Alayna Ertl was taken from her home early Saturday morning by a family friend and later found dead. Tonight at 8:30 a vigil will be held at the Church of St. Anthony in Watkins.

Visitation for Alayna has been set for Thursday from 4 to 8 p.m. at the Ertl Funeral Home in Watkins. The funeral service will be held at 10:30 a.m. Friday at the Church of St. Anthony.

A GoFundMe account has been set up to help the family with expenses. In one day, hundreds of people raised more than 26,000 dollars for the family.

Formal charges against 26-year-old Zachary Anderson of Monticello, the man allegedly responsible for Alayna’s death are expected to be filed later this morning.

You can reach the GoFundMe page here: