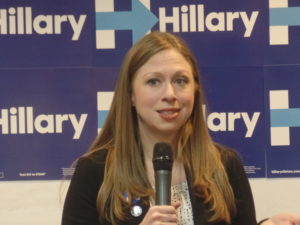 Chelsea Clinton is set to be in Minneapolis today (12:20) to campaign for her mom (Hillary Clinton) and to urge Minnesotans to vote early.

Clinton last visited Minnesota in February and said there are misconceptions about her mom she’d like to clear up. For example, Clinton expressed that she wished “that more people understood that for those of us who know her best, that know her well,she is the epitome of warmth and generosity.”
Clinton will be joined today by Governor Mark Dayton and other local elected officials at Plaza Verde on Lake Street.

The head of the state Republican party says he’s not surprised Chelsea Clinton is back in Minnesota today campaigning for her mom Hillary. Chairman Keith Downey says the Clinton camp is trying to secure the party’s left wing progressive base:

Earlier this week Bernie Sanders was in Minneapolis and Duluth campaigning for his once rival — Hillary Clinton.