You are here: Home / News / Clinton speaks to AFT members in Mpls 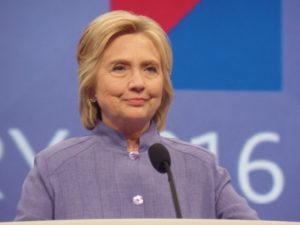 As Republicans kicked off their national convention in Cleveland Monday night, Hillary Clinton was campaigning at the American Federation of Teachers convention in Minneapolis.

Clinton talked about education and gun violence before turning her attention to Donald Trump saying “what do our children think when he calls women ‘pigs’ or mocks a reporter with a disability, or when he talks about banning 1.5 billion Muslims from entering our country. You wouldn’t tolerate that kind of behavior in your home or in your classroom. How can we stand for it from someone running to be the president of the United States?”

Clinton also spoke about meeting with the family of Philando Castile, the black man who was shot and killed by an officer in Falcon Heights, and said of recent police shootings and gun violence, “we cannot let this madness continue.”

In response to Clinton’s visit, State GOP Chair Keith Downey says “Clinton talks a big talk, but when it comes down to results we have a more dangerous world.”