You are here: Home / Sports / Coaches want Walsh to be good again 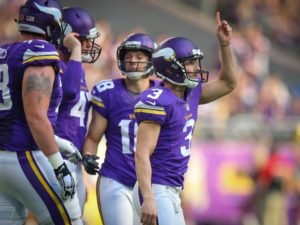 Minnesota Vikings kicker Blair Walsh has been tight-lipped in recent days about the struggles that prompted the team to bring in free agents for tryouts this week.

Special teams coordinator Mike Priefer has been with Walsh for all five of his seasons in the league, so if anyone knows how the kicker is dealing with the criticism, Priefer might be the guy.

”It kind of lit a fire under him,” Priefer said on Thursday. ”He was a little bit, got ticked off in a good way I think. Because he’s a competitive young man. When you bring in guys that are potentially going to take your job, guys that want your job. He’s a competitive guy and that’s the way you want him to react.”

After Walsh missed his third extra point, had a field goal blocked and errantly had a kickoff reach the end zone when it was supposed to land inside the 10-yard line in an ugly overtime loss to Detroit on Sunday, the Vikings brought in six kickers on Tuesday to look at as possible replacements. They ultimately decided not to sign any of the free agents this week, but it did send a clear message to Walsh that he needs to be more consistent.

When asked how he thinks Walsh will respond, coach Mike Zimmer said: ”I wish I could say I have an idea, but I don’t. But I do know this kid is pretty confident in his abilities and he wants to prove a lot of people wrong. That’s part of it, too.” 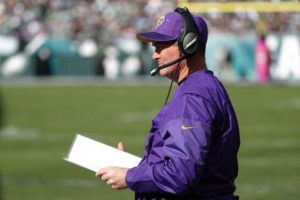 The Vikings have lost three straight games after a 5-0 start, and they desperately need Walsh to figure things out heading into a game at Washington on Sunday. The straight-talking Zimmer appeared to be hinting at a parting with Walsh on Monday, but has since tried to reiterate his support for the kicker.

”The guy has missed three extra points. I can probably get 10 guys that screwed up three points this year,” Zimmer said. ”We all make mistakes. I think the guy is a very talented guy.”

Priefer said he expects Walsh will pull himself out of the funk, as he did after a rough senior season at Georgia. Priefer said Walsh hit all eight of his tries in practice on Thursday, perhaps a little more focused after the tryouts earlier in the week.

”If he didn’t react that way I would be really worried and then we probably would be looking for another guy,” Priefer said. ”He got, I don’t want to say angry, but he got a little fired up in a very respectful way. Just like he is, he always is. I expect him to go out and kick well for us this weekend and the rest of the year.”