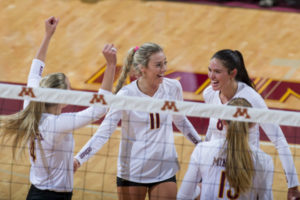 GOPHERS READY TO COMPETE IN MADISON
The University of Minnesota travels to Madison, Wis., to compete against the Wisconsin Badgers, Wednesday, at 8 p.m. The match will be played in the UW Fieldhouse and is sold out.

FOLLOWING THE GOPHERS
Wednesday’s match will be televised live on the Big Ten Network. The match will also have a gameday live page on gophersports.com.

GOPHERS ON THE ROAD
Minnesota is 6-2 on the road this season and 3-2 when playing on the opponent’s home court. Both of the Gopher losses came when playing at Stanford and Penn State, each ranked top 15. The Gophers were 9-3 as a team last season in road contests.

ABOUT THE BADGERS
The Wisconsin Badgers are ranked No. 1 for the first time in program history and sit with a 14-1 overall record and a 6-0 mark in league action. Their only loss of the season came against North Carolina in the ACC/Big Ten Challenge, Sept. 9. Since that loss, the Badgers have gone on a nine-match win streak. Freshman Molly Haggerty takes a majority of the Badger swings with 167 kills in 437 attempts. Haleigh Nelson and Tionna Williams follow with 137 and a 122 respectively. Lauren Carlini has 601 assists, while Kelli Bates leads the team with 201 digs. As a team, the Badgers are hitting .273, average 2.94 blocks per set and 1.42 aces per set.

ALL-TIME SERIES AND LAST TIME
Minnesota holds a 46-30 all-time advantage over the Wisconsin Badgers, dating back to 1975. Since 2013, however, the two teams are neck-and-neck with a 3-3 mark. Minnesota and Wisconsin split action in 2013, Wisconsin won both contests between the two teams in 2014, followed by Minnesota winning both matches last season. The Gophers won in five against the Badgers in Madison last season, while they took home a four-set win at the Sports Pavilion. 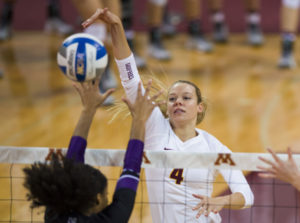 GOPHERS RANKED THIRD IN RECENT AVCA POLL
With a loss to then No. 15 Penn State, Minnesota went from No. 1 to No. 3 in the recent American Volleyball Coaches’ Association poll. The Gophers have or will face 12 teams ranked in the top 25, including this week’s match ups in No. 1 Wisconsin and No. 14 Michigan State (Saturday). Into the seventh week of the polls, Minnesota is 8-2 against ranked teams.