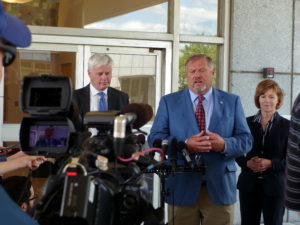 Legislative leaders and the governor have started a one-week “cooling-off” period before they try again to move forward with a tax cut bill that Dayton pocket-vetoed, plus a bonding bill the governor is insisting on before he’ll call a special session. A big sticking point could be the proposed Southwest Light Rail Line in the Twin Cities.  House Speaker, Republican Kurt Daudt says, “It’s gonna be very difficult for us to take action on Southwest Light Rail when there’s two pending lawsuits and there’s so much unknown about the process that led us up to this point.”  But his Senate counterpart, Democratic Majority Leader Tom Bakk says, “A bonding bill can’t pass the Senate without a provision in it that allows us to access the federal money for Southwest Light Rail.”  Governor Dayton indicates it’s a “must have” for him also.