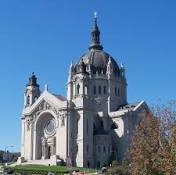 The Cathedral of St. Paul

There’s another hearing in federal court later this week on two competing proposals to compensate victims of priest sex abuse — one from the Archdiocese of Saint Paul and Minneapolis, the other from a survivors’ group. Attorney Mike Finnegan says in the Archdiocese plan,  “either the assets or the insurance, they’re severely undervaluing.”  Catholic Church officials propose earmarking 155 million dollars or more for a victims’ fund, and attorney Charles Rogers says all available assets are in the mix and the Archdiocese negotiated the best deal it could with its insurance companies.  Rogers says, “The parties need to decide ultimately whether they consent to that plan, or whether there’s a contested case hearing.”

Survivors and other creditors will vote on the plans and a federal judge then makes the final decision.