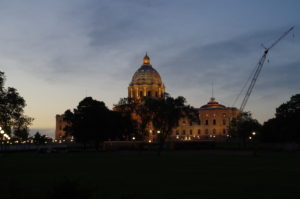 State budget negotiations continue this morning at the Minnesota Capitol.  Republicans and Governor Mark Dayton seem to be making progress toward agreement on the state budget, with both sides on Tuesday moving toward each other on spending and tax cuts.   But major sticking points remain.   One is transportation funding, and Senate Republican Majority Leader Paul Gazelka reiterates there will be no gas tax increase and a last-minute proposal from the governor for a license tab fee increase is a non-starter.  Gazelka says the governor “knows we’re serious about that, and that’s what we’ve gone around and around with over the last few years.”  Dayton responds with tax cuts Republicans are proposing, “There just isn’t any room, in our judgment, for the 372-million-dollar revenue drain to go for transportation.”

The governor says one of the first things they have to do today is reconcile their numbers on the health and human services bill, where he says the two sides are about 130 million dollars apart.  Dayton says, “If we could get that number narrowed down, I think we then have a much clearer picture of what difference actually remains.”  House Speaker, Republican Kurt Daudt says, “The H-H-S numbers are putting a crunch on the entire state budget, and that’s the toughest part that we’re gonna have to deal with.”

Although both sides are still a good distance apart, the governor has come up on the dollar amount of tax cuts he’d accept while Republicans have come down from their original 1.1-billion-dollar figure. And in major budget areas like E-12 education and higher ed, both sides are moving toward each other on spending — but health and human services, the second-largest component of the state budget, is still a major sticking point, as is transportation.

And Gov. Dayton’s comments on that same subject: