You are here: Home / News / Dayton, GOP urge each other to use caution, despite large state budget surplus (with AUDIO) 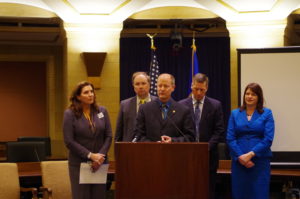 Another state budget surplus has Democrats telling Republicans, no large tax cuts — and Republicans telling Democrats, no big spending increases.  The state has 1.65 billion extra dollars, but leaders are uncertain what the Trump administration and Congress might do. Governor Dayton says when he was in Washington, “Administration officials were unable or unwilling — but I think it was unable — to provide details about their intended changes to Medicaid.”

Minnesota Senate Majority Leader Paul Gazelka argues with continued state budget surpluses there ought to be some real tax relief, but Republicans will watch spending also.  Gazelka says, “You heard the governor talk about what we don’t know what the federal government’s gonna do. We could easily have a billion or more dollars of shortage down the road, depending on what they do — and how does that affect us?”

Dayton says he’ll release his revised budget by mid-March.  Republicans have not unveiled their budget proposals yet, saying earlier they were waiting for the latest economic forecast released yesterday.

Excerpts from Tuesday’s news conferences by…