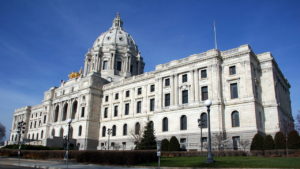 Governor Mark Dayton and legislative leaders meet again this afternoon, trying to hammer out an agreement on a special session to pass a bonding bill for state construction projects — legislation that failed in the closing minutes of the regular session in May.  Their last formal sit-down was nearly a month ago before the national political conventions, and at that time Governor Mark Dayton expressed optimism for holding a special session the third week of August. But House D-F-L Minority Leader Paul Thissen puts chances now at less than 50-50, “because those big stumbling blocks that have kind of been there from the end-of-session still have not been resolved.”  Among those is funding for Southwest Light Rail in the Twin Cities.  Thissen says once the State Fair rolls around, it’s too late for a special session because the campaign season has started and most of the construction season is past.

Democrats and Republicans disagree over the dollar amount of the bonding bill as well as the mix of projects.  Also on the agenda for a special session is a tax cut bill that the legislature passed during its regular session and Governor Dayton said he’d sign — but he ended up not doing so because of an error in the bill.