You are here: Home / News / Dayton on official visit serves steaks to MN troops in Croatia 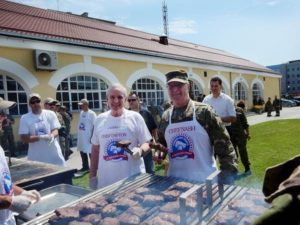 Governor Mark Dayton has just finished day two of his three-day visit to Croatia to celebrate a 20-year partnership with that eastern European nation. The governor says one of the highlights was joining a Saint Paul group to serve steaks to Minnesota and Croatian troops at the barracks.  Dayton quipped,  “A lot of the Minnesota Guards, men and women, came over to my side so they could get a steak served by the governor — although one of them claimed that he asked for it medium and I gave it to him rare, and I said, well, I screwed up another assignment, you know.”  Dayton has high praise for “Serving the Troops,” which he says has been traveling all over the world with delicious steak dinners for servicemembers.