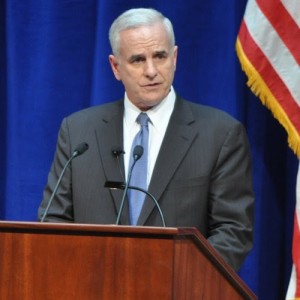 Governor Mark Dayton is proposing state-paid rebates for Minnesotans who are facing big health insurance premium increases and not eligible for federal tax credits.  The governor is asking legislative leaders for a plan before the MNsure open enrollment period begins next Tuesday.  “The ball’s in their court now,” he says.  “We offered a plan here. Somebody’s got a better idea, fine. If they don’t have a better idea, then we’re either gonna do this one or they’re gonna say we should do nothing at all.”

Republicans, who held town hall meetings Thursday night in Bemidji, Owatonna and Red Wing, say Obamacare and MNsure must be replaced with an open-market system.  But the governor wants insurance premium relief for 123 thousand Minnesotans until the legislature can address the larger issue in January.

Dayton says the legislature can’t postpone action until the regular session in January. He says people need to know what the plan is, by the time MNsure open enrollment begins next Tuesday.  Referring to Republicans he says, “It’s always easy to sit on the sidelines and criticize, especially by people who haven’t lifted a little finger to make this situation better.”  Republicans respond they proposed a number of solutions which Democrats rejected, and now the state’s health insurance marketplace is a mess.