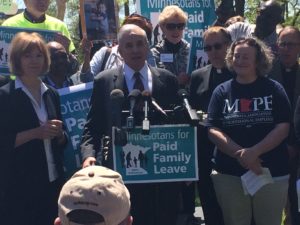 Governor Mark Dayton joined Minnesotans outside the State Capitol Tuesday pushing for paid family medical leave. The Democrat-controlled Minnesota Senate has passed a bill and the governor said to a cheering crowd, “All we need is for the leadership of the Minnesota House to recognize what all of us do, which is: This is a moral responsibility. This is really a measure of the moral integrity of the state of Minnesota.”

Top Republicans say Democrats put together their family leave bill without sufficient input from the business community. They say they’re willing to work on a solution that addresses everyone’s concerns.