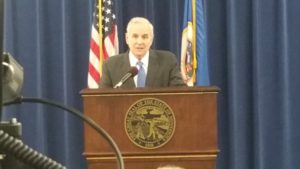 Governor Mark Dayton is threatening *not* to sign a tax-cut bill unless Republicans agree to approve additional funding for a number of projects and programs in a special session. Dayton says the tax bill has an error affecting revenue for the new Vikings stadium that must be fixed, and a special session is the way to do it.  He says, “We’ll have a special session when they [Republicans] agree to my conditions for a special session. It’s really clear: One, two, three. And if they’re not willing to do it, they have no one to blame but themselves.”  Senate Republican Minority Leader David Hann responds,  “To ask us to accept without negotiation… a list of half a billion dollars of additional spending, bonding and spending combined,… is completely unreasonable.”