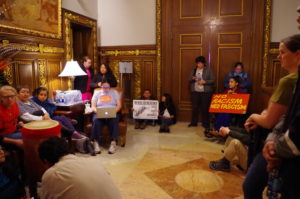 Demonstrators urged Governor Mark Dayton to veto a bill banning drivers licenses for illegal immigrants, as they camped out Tuesday afternoon and evening in his State Capitol office. Adriana Cerrillo from Minneapolis says as a U-S citizen,  “I don’t want to get in a car accident with a person that doesn’t have a driver’s license, that first of all doesn’t know the rules of the road. But they are going to be driving, regardless whether people like it or not.”  John Joslin from Saint Paul argues the governor should take his cue from one of his heroes, John F. Kennedy, who wrote “Profiles in Courage.” “This is his chance to really enhance his legacy, and to be a profile in courage,” Joslin says.  “I’m hoping at the last minute he will come to believe that and to stand up.”

Governor Dayton says he strongly disagrees with the ban on drivers licenses for undocumented immigrants, but contends it was necessary in negotiations on a public safety bill to go along with Republicans’ demand.