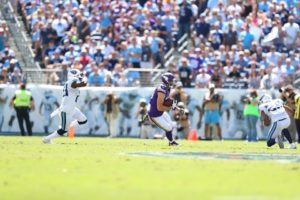 The Vikings will be back on the practice field later today, getting ready for Sunday’s showdown with rival Green Bay.  The teams will meet on “Sunday Night Football” at U-S Bank Stadium in downtown Minneapolis. The Vikes opened the season with a 25-16 win in Tennessee. The Packers dropped the Jaguars 27-23 in Jacksonville to begin the year. The teams split their two meetings last season with each winning on the road.

Detroit Lakes native Adam Thielen, a starting receiver for the Vikes says they have to treat it like just another game:

That said, Thielen, a former Minnesota State-Mankato star, says he does realize this is a big rivalry:

He says he feels good about his game, especially after a summer of hard work:

Thielen says the Vikings offense can also get better, especially in the red zone:

This will be the first regular season game at U-S Bank Stadium and kicks off at 7:30 on Sunday.