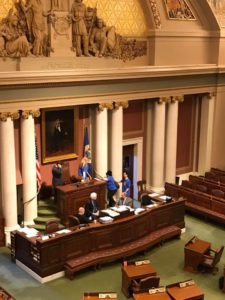 Republicans have decided to continue a special session beyond the one day that was agreed on, because they’re running behind schedule on finishing the $46 billion state budget.  House Democratic Minority Leader Melissa Hortman asked Republican leaders “What is your intention at 7:01 am today?  Do you plan to abide by the agreement or break the agreement?”

Peppin says Democrats did that by proposing amendments to budget bills that were already agreed on with the governor.  She added the Minnesota Constitution states:

That aside, it appears legislative leaders plan to meet with Governor Dayton to assess the situation.

Meanwhile, as Republicans and Democrats bargain over issues affecting unions and state employees, lawmakers continue trying to finish the state budget per their agreement with Governor Mark Dayton.  They’re way behind schedule, the House passing the first of the final set of budget bills around dawn this morning .  Saint Paul Democrat John Lesch warns many of Republicans’ tax cuts will go to the wealthy:

“I believe that some of you actually believe that, if you give rich people money, it makes everything better — but the statistics don’t bear that out,” Lesch added.