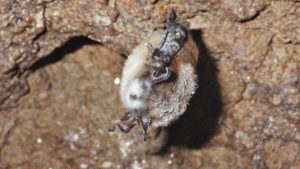 DNR officials today announced that white-nose syndrome is spreading in Minnesota’s hibernating bats. The DNR’s Gerda Nordquist says the disease was first confirmed at Lake Vermilion-Soudan Underground Mine State Park in St. Louis County last year. It has now also been confirmed in Becker, Dakota, Fillmore, Goodhue and Washington Counties. And it is suspected in four others: Hennepin, Lake, Pine and Ramsey.  According to the DNR’s Ed Quinn:

The disease is named for the fuzzy white growth of fungus on infected bats and is not known to pose a threat to humans, pets or other wildlife. The DNR is working with federal and state officials to consider a variety of treatment trials to test new fungicides that may kill white-nose spores. Treatments typically don’t eradicate the disease, but would slow its spread and reduce the number of bat deaths.