You are here: Home / News / DNR releases map of required buffers for public waters and ditches 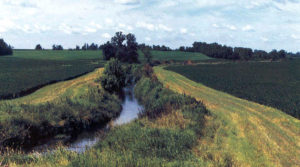 The D-N-R today released its map of public waters and public ditches that will need to have buffer zones around them to reduce runoff into rivers and lakes. Commissioner Tom Landwehr says about 20 percent of *private* land around *public* ditches already has a buffer, but “this law was intended to get to the other 80 percent that don’t have an existing buffer.”  Landwehr says landowners are eligible for certain programs that will pay for it. The deadline to have buffer strips in place is November 1st, 2018. A map of affected ditches is at mndnr.gov/buffers. Landwehr says private land around public lakes, rivers and streams for the most part will not require *new* buffers because that law has been in place for a while.