You are here: Home / News / DNR says no way to stop spread of invasive zebra mussels in Leech Lake (with AUDIO) 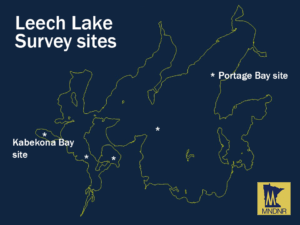 Larvae of zebra mussels have been found at two widely-separated spots in Leech Lake, and D-N-R officials say there’s no way to stop the spread of the invasive pests on the third-largest lake in Minnesota.  Area Fisheries Supervisor Doug Schultz says, “Densities will increase at some point exponentially, and they’ll overshoot basically the carrying capacity of the lake to support that excessively high density. It’ll come back down and level off.” And will the increasing zebra mussel population damage fishing on Leech Lake?  Schultz says, “The ecological ramifications, we don’t have a good handle on that yet, but potentially as those densities increase and productivity ends up going down, basic productivity goes down, that potential is out there.”

Schultz says the appearance of zebra mussel larvae in Leech Lake is no surprise because nearby Cass Lake and Lake Winnibigoshish are already infested. He blames people not following proper draining and drying procedures when moving equipment from one body of water to another.

Listen to the interview: