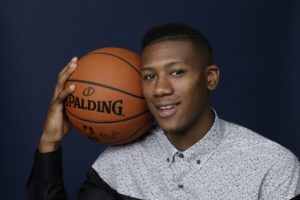 The Minnesota Timberwolves selected Providence point guard Kris Dunn with the fifth overall draft pick Thursday night. Whether he remains in Minnesota remains to be seen. The Wolves were engaged in several trade discussions with teams who were eager to get the defensive stopper.

The Philadelphia 76ers offered the Timberwolves Nerlens Noel, Robert Covington and the Nos. 24 and 26 picks for Dunn, a person with knowledge of the negotiations told The Associated Press. The person spoke on condition of anonymity because the teams were not publicly discussing trade proposals.

The Sixers offered the same package to Boston at No. 3 to try to pair Dunn with No. 1 overall pick Ben Simmons, and the Wolves were also looking hard at trying to get Chicago’s Jimmy Butler.

If the Wolves keep Dunn, his defensive mindset would be a perfect fit for Thibodeau.

Dunn said before the draft he would love to play for Thibodeau, believing their hard-working personalities would mesh well on a team with a promising young core that includes Karl-Anthony Towns, Andrew Wiggins and Zach LaVine.

But if he does stay, it could mean the end of the line for Ricky Rubio in Minnesota. Rubio has spent five years with the Timberwolves and is coming off of his best season as a pro. But the Spaniard plays the same position as Dunn, who may not want to come off the bench for long.

As good as Dunn is, Thibodeau and owner Glen Taylor are determined to make the playoffs next season, ending the franchise’s 12-year drought.

With a team full of youngsters, the Wolves are looking for established veterans to make that happen. And it could be difficult to do that with a rookie starting at point guard.

That Dunn was even available at No. 5 was something of a surprise. Internally, the Wolves expected Dunn to be long gone by the time they came on the clock and were looking at Oklahoma’s Buddy Hield and Kentucky’s Jamal Murray to join the backcourt. But Boston rejected Philadelphia’s offers for the No. 3 pick and chose Jaylen Brown out of Cal, opening the door for Dunn to slide.