You are here: Home / News / Dustin Johnson says forget the past in Ryder Cup 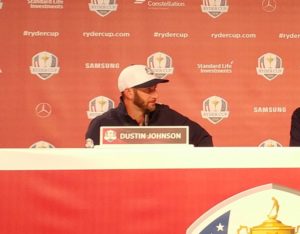 Dustin Johnson says the U.S. team needs a short memory when it comes to the Ryder Cup.

He says the Americans have not brought up what happened at Medinah four years ago when they blew a 10-6 lead going into the final day, winning only three singles matches. That extended two decades of mostly losing.

The next chance starts Friday at Hazeltine. U.S. captain Davis Love III also is ignoring recent history. He says this a new team that has never played together.

That’s especially true for Europe, which has won eight of the last 10 times. Europe has six rookies on its 12-man roster. It has never won a Ryder Cup with that many newcomers when the matches were on the road.